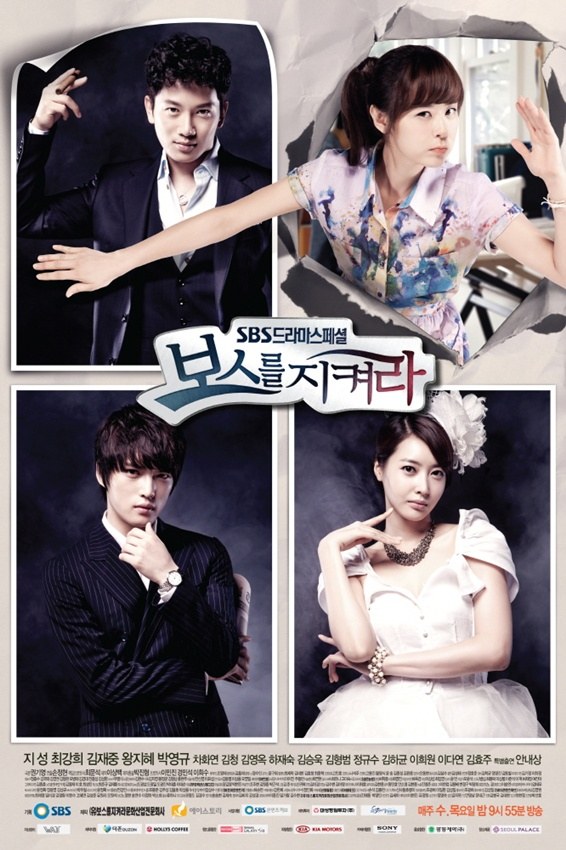 The first version features all four of the main actors, who pose in a way to best bring out their character’s charms; meanwhile, the second version features Ji Sung and Choi Kang Hee in comedic poses.

Choi Kang Hee plays the role of ‘Noh Eun Sul’, the new secretary to the rebellious son of a conglomerate, ‘Cha Ji Hun’ (played by Ji Sung).  JYJ’s Jaejoong plays the role of ‘Cha Moo Won’, who’s considered the ‘prince of the financial world’, and Wang Ji Hye plays the role of ‘Seo Na Yoon’, a perfectionist lawyer who completes the love lines between the four characters. 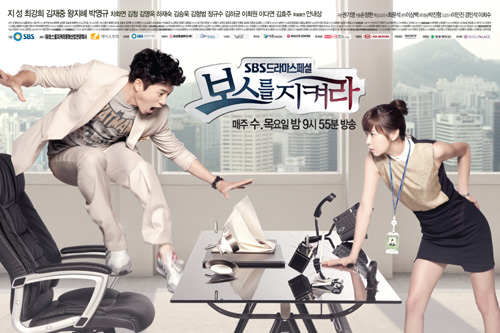 The second poster was done as a parody of the movie “The Devil Wears Prada” by showing a fed-up secretary taking charge over the actions of her boss.

The drama will begin airing on August 3rd at 9:55 PM KST.

Recently, JYJ’s Jaejoong updated his Twitter with a post that is causing quite the commotion amongst fans of both JYJ and TVXQ.

He wrote, “I don’t know if I should be saying this… I miss Yunho and Changmin… No matter what anyone says, they’re our members and I know them better than anyone else… People might say it’s pointless in saying this but… I want to see them again. It’s been a while.”

Well, it seems Korean language can be played out in many ways on purpose or accidentally. Perhaps, this is why there was (^still is) such a discrepancy of information and perception between  korean fans and international fans. And also the reason that many international fans still keeping the hope for 5 together under the name of faith, while most of korean fans escaped from such an illusion long ago.

Now, let’s look at Allkpop translation of JJ’s tweet: He said 보고싶네 on the 1st line of his tweet, then 보고싶다 on the 3rd line. Both are exactly the same word with the same meaning, but Allkpop translated it as `miss´ for the 1st & `want to see again´ (which was also the title of their posted article) for the 3rd line, which was NOT NECESSARY. Koreans can see this without thinking it out much.

It is another story that they posted only this tweet but not the other 3 immediately before this one & 2 other afterward. So, the agenda is obvious.

END_OF_DOCUMENT_TOKEN_TO_BE_REPLACED

Teaser with subs Here ( Via: Viki.com)

END_OF_DOCUMENT_TOKEN_TO_BE_REPLACED

Jaejoong: Junsu is always the first among the members to wake up. Among the tired members, the first to do his hair, make up and the first to do his shoot. He has been like this for 8 years. Junsu’s sincerity is what brought us here and I’ve come to emulate Junsu as a colleague and friend. There are a lot of lifelong lessons to be learned from Junsu.

END_OF_DOCUMENT_TOKEN_TO_BE_REPLACED

Summary of the article in “Shukan Gendai” –Weekly times- Newspaper

On the 10th of May, a warning was sent to the Sumo Organization, clearly requesting the suspension of the event.

Then, a representative from the side of the Sumo Organization called on the 12th of May, saying “figure out your trouble between the involved parties (T/N: JYJ and Avex) because we’ve already allowed the use of the venue, and received the rental fees” the representative informed them rudely. (T/N: the quotes from the representative were written in informal speech that can be considered rude when spoken in such a formal situation.)

“Right before the concert on the 2nd of June, we sent them another warning, but it was useless” a person from Avex said. Avex took all the temporary methods to stop the concert but, it is now forced to take legal actions against the Sumo Organization, the management company and others seeking compensation of 143,400,000 Yen (T/N: approximately $1,834,200) and is taking the case to Tokyo district court.

The compensation was estimated based on the calculation of the profit that Avex would have gained if they held the event as the management company. “All the other concert venues in Japan knew about the trouble between us and the Right-wing gangster organization, and refused to host the concert.

END_OF_DOCUMENT_TOKEN_TO_BE_REPLACED

Note from SYC team
1. This interview was during 3HREEVOICES II DVD time.
2. Jaejoong and Yoochun flew to Japan before Junsu.
3. The interview contained the boys’ thoughts before their Charity Events in Japan.
4. This is the forbidden issue.

[TOHOSHINKI] a 5 member group that was extremely popular.

But 2009 summer, a shocking incident occurs. Jaejoong, Yoochun, and Junsu, these 3 members filed a law suit against their agency to stop their contracts.
This made the “5 member” Tohoshinki’s activities to be suspended.
It has been a year and a half. The 3 members are facing many difficulties but have a new start as “JYJ”.
In Korea, they are not being able to go on music programs, and even in Japan, their activities are a blank.
Even at a situation like that, the album they released showed a big response, and through dramas,musicals,CF’s, their solo activities have been well received.
They are continuously showing results.

Also this month, the long-waited private DVD is going to be released.
The members who visited Japan after a long time, for a photoshoot, the fans welcomed them with passion.
The 3 members who are making their way, one step at a time right now, will we be able to interview them…?
They have finally responded to our offer.
JYJ who were filming for a DVD in Korea, we headed to Seoul in order to meet them!
Please enjoy the interview that was answered seriously, and the many expressions they showed the camera.