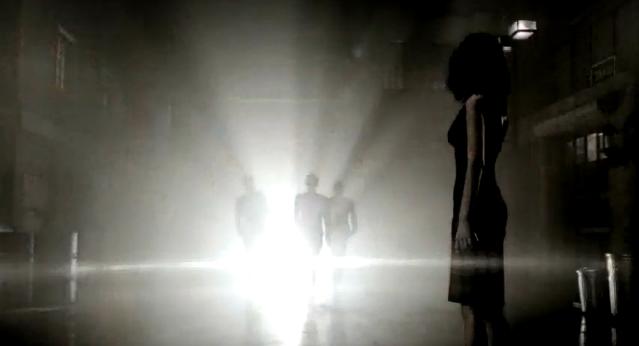 After bringing us to tears with their sad MV for “In Heaven“, JYJ is back to bring us the sexy in their new MV for “Get Out“!

The music video. The video begins with the JYJ members sitting in their sexy cars (Yes, those are their real cars!) staring at the girl getting all cozy with another guy. They then call the girl up to see what she’s doing and she lies to them in front of their face…except she doesn’t know they’re right in front of her. (Which is ridiculous because how do you not notice a BRIGHT red car with a sexy man in the driver’s seat right in front of you?) I don’t know about anyone else, but a good looking guy driving a dream-like car will definitely catch my eyes within seconds but anyways, they continue to glare at her with an angry/hurt look. -Cue sexy dancing time- Later, we see the girl trying to get away from the guy, possibly because she’s feeling guilty about cheating on JYJ or yet an even better reason, she finally realizes she hasn’t been in her right mind to cheat on the the sexy beings known as JYJ. What she doesn’t know, however, is that JYJ has already caught onto her scandalous ways. She then realizes that it’s too late when JYJ walks up to her looking mighty fine in their black suits and gives her this look as if saying, “You just lost the sexiest thing in your life.” The video then parts with JYJ walking away towards the light while leaving the girl in the darkness.

The dance/choreography. The choreography for “Get Out” involves a lot of wide arm movements (No wonder their arms are looking so good!) and is very energetic. It’s very fun, and enjoyable to watch because you can just see the energy piercing out of them when they dance. As I am fully aware that the only prominent dancer in JYJ is Junsu, I was very impressed with how Jaejoong and Yoochun both kept up with the energetic dance moves and how synchronize their dancing as group were in the video.

The song. Produced by Jaejoong and Yoochun, “Get Out” is one of the few upbeat songs in JYJ’s new album. It starts out with a beautiful piano intro that tricks you into thinking it’s another ballad song but then the chorus kicks in and shocks you with a sexy and infectious beat that gets your head bobbing along to the song. Then the “HEY”s and the “HO”s comes in and you start finding yourself resisting the urge to throw your arms up like JYJ. “Get Out” is a perfect and catchy song that showcases JYJ’s variety of talents because you get to hear not only their beautiful harmonies, but also each members’ strong vocals.

Thoughts. When I first heard JYJ’s new songs from their recently released album, their title song, “In Heaven”, took my breath away and it was my favorite song in the album. However, now that I see this amazingly produced MV, I realized that I may just like “Get Out” a little bit more than “In Heaven”. The song has a beautiful melody and yet it still manages to pump my energy and gets me on my feet. It’s like the best of both worlds for me, a combination of a ballad and an upbeat song.

Posted In: Info/Trans
Tagged: Get Out, JYJ, Review