On the October 31st broadcast of ‘Come to Play‘, Eunhyuk of Super Junior revealed that he has been friends with JYJ‘s Junsu since elementary school, which has curbed important personal decisions in his life. The guests were discussing their drinking habits, and Eunhyuk confessed has never consumed a single glass of alcohol in his entire life.

Host Yoo Jae Suk asked Eunhyuk, “How is your alcohol tolerance? Do you have any drinking habits?”

END_OF_DOCUMENT_TOKEN_TO_BE_REPLACED

If you go to the popular portal site http://www.Nate.com now, you can see Jaejoong on the top right corner– JJ and his home are hot! 😀

The blue letters next to his face read: JYJ Kim Jaejoong Reveals His Home. ^_^

END_OF_DOCUMENT_TOKEN_TO_BE_REPLACED

I’m ready to share my feelings about JYJ concert in Barcelona.

First thing I want to say: I saw once again how our love for JYJ can overcome any border and any cultural barrier and assemble people from around the world.

Through the variety of people lined up hours before the concert, I could hear dozens of different languages at once: Arabic, Chinese, English, French, German, Korean, Japanese, Dutch, English, Spanish, Portuguese… This was the living representation of affection for these resolute guys, a colorful and heartwarming microcosm: the United Nations under the aegis of JYJ.

While queueing, I had the pleasure to get acquainted with a group of a dozen of Japanese obasan, that were impressed by the fact that a middle-aged Italian couple was present there to see the concert and above all that my bias was Jaejoong.

It was really funny that they were amazed that we had made a flight of an hour and a half when they flew half of the world for only 3 days in Barcelona and exclusively to attend JYJ concert.

They told me that they were present at last week concert in Japan and at the one in June. They even participate in almost all events in Korea. This is what I call dedication.
They weren’t obsessed 15 year old fans but a diverse and passionate group of 40-70 years women . The best among them was a funny lady in her late 60, in love with Jaejoong, wearing a Hello Kitty mask!

We exchanged our point of views on our secured between exclamations of wonder ‘Sugoi’, ‘Kakkoi’, looking at Jae’s pictures on our respective phones. The ladies were amazed by me flaunting few words of my “flawless” Japanese and my “erudite” knowledge of kanji. Actually, I was helped by a wonderful Japanese girl living in Rome that acted as interpreter for us (Mami-san thank you for everything!). She wasn’t a JYJer before attending the showcase at Salon del Manga in the morning, she was only accompanying her aunt that came from Japan. Then, after the event, she converted herself to JYJ religion. JaeChunSu power!

We took some photos and we exchanged email addresses.

It was a pity that I lost sight of them entering the venue and I couldn’t find them throughout the place.

END_OF_DOCUMENT_TOKEN_TO_BE_REPLACED

Thank You for participating in the [POLL] Handsome with Blond Hair!

And the Winner is

More than 14,000 fans had decided The Most Handsome and Good Looking Idol with Blond Hair! And in the end, the winner is

The guy who is not just a good looking but also a good singer!

Best known as 1 of the best Musical Actor and a Singer,  Congratulations Junsu!!!

END_OF_DOCUMENT_TOKEN_TO_BE_REPLACED

[TRANS] Rafa Mendez: Thanks for your tweets…  and I want to tell all the fans of JYJ, they are the best!!!! All my respect to them because they are great.

[TRANS] Rafa Mendez to Fan 1: Thanks they deserve that and more…

[TRANS] Rafa Mendez to Fan 2:  It’s is impressive how humble and professional are them and the respect they have with everything… JYJ is the Best…
END_OF_DOCUMENT_TOKEN_TO_BE_REPLACED

END_OF_DOCUMENT_TOKEN_TO_BE_REPLACED 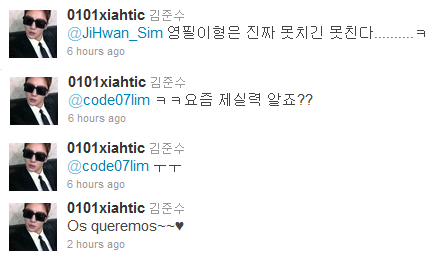 0101xiahtic: Youngpil hyung is seriously bad at playing…keke
-in response to-
JiHwan_Sim: A day in which we set bowling records! 1st place Ji Hwan^^ 2nd place YuJoong hyung. 3rd Youngpil hyung. 4th Junho hyung. This is the first time in bowling that we have gotten scores like this, haha http://twitpic.com/78v1dt

0101xiahtic: @code07lim keke You do know about my skills these days, right?
-in response to-
code07lim: @0101xiahtic @jihwan_sim kekeke we need to have a showdown between all of us brothers once more

0101xiahtic: ㅜㅜ
-in response to-
code07lim: Had coffee in the morning with the group. it’s been a long time since we have gotten together, a good coffee shop is the best way to get rid of the bad feelings in the soul~

Source: @0101xiathic +
Translation by: DoctorJaee of JYJ3
Please do not add, alter, or remove the credits.