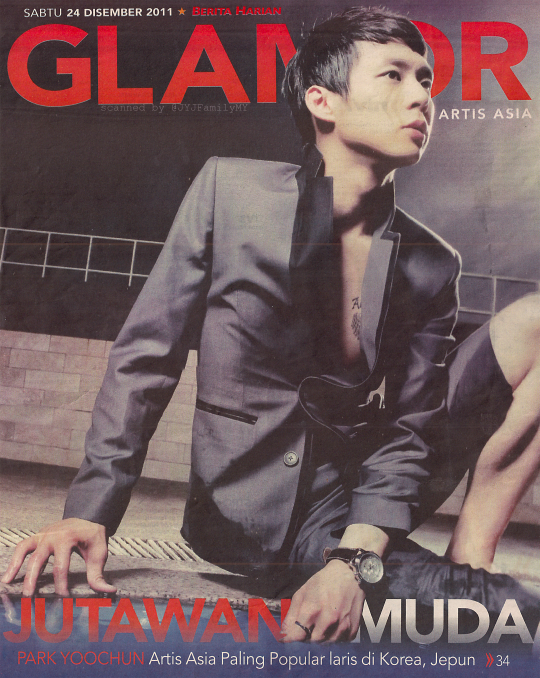 He just reaches the age of 25, but Park Yoochun’s achievement is probably envied by those who dream of becoming a star as well.

Park Yoochun is in the list of five young celebrities that earned handsome amount that reached RM31 million (US $10 million) per annum that become inspiration for the young generation to achieve the successful career as him.

He is not only popular in his own country but in Japan as well. His explosive popularity allows him to receive from RM 90,000 up to RM 100,000 per appearance.

This luxury is not achieved overnight. In the beginning of his life, he faced hardship, but he didn’t give up nor let the fate ruled out his luck.

Born and raised in Seoul, Korea on 4th June 1985, his family immigrates to Virginia, US when he was 13 years old.

“The people around me assumed that the migration to the US will change my life. They consider me as the lucky one.”

“Reminiscing those moment makes me feel like not repeating it again. The bad financial status of my family, drove me to work hard,” he said.

The beginning of their life that crossed a lot of difficulties give a huge impact to this lad that being nicknamed as Micky and Yuchun by his fans.

However, everything changed in 2003 when SM Entertainment held an audition in US and Yoochun was chosen on that session. With four other members, he joined TVXQ and quickly rose to popularity in a short time and labelled as Asian star, other than King of Korean Wave.

TVXQ received various recognitions in their own country, besides; Yoochun is among the important persosn that consolidates that group journey.

Their achievement is not only in Korea. The quick popularity of TVXQ spread in Japan and a week after their debut, they started planning various activities in the Land of Rising Sun.

Composing talent that being gifted by the God encouraged Park Yoochun to compose the song Kiss The Baby Sky , that had become the theme song for a morning news program in Japan that able him to achieve high income.

However, the sky is not always blue. In 2009, Yoochun faced the biggest crisis that may lead to many possibilities while his career is on top.

However, his worries were fading away when he was given a chance to start anew in his career.

He chooses to be an actor and through Sung Kyun Kwan Scandal that was being sold to a few countries, the royalties that he received is about RM 20 million. It (SKKS) was recognised as the most favorited television drama.

His fans in Japan giving positive response towards the drama, in the same time making Yoochun received some amount of payment through the sales of the DVD.

He received RM951, 000 for each drama episode, while RM380,000 more received from the overseas sales that make Yoochun as a celebrity with earnings that reached RM63 million.

Not only acting, Yoochun that was being nominated as The Most Popular Asian Artist also sung the theme song for the drama that achieved various recognition on online charts.

They also produced an album that sold more than 410,000 copies, besides collecting total amount of 780,000 copies for few popular singles in Japan.

In 2010, more than 1.2 million copies of album that been sold indirectly contributing to the high income of this lad.

In the mid 2009, Yoochun with two other members of TVXQ, Kim Jaejoong and Kim Junsu filed a lawsuit to SM Entertainment because of unfair contract.

The case is ongoing but the court allows them to actively participate in entertainment industry. On October 2010, they formed JYJ.

Throughout 2011, Yoochun individually received handsome contract as the ambassador for tea drinks product TiO, Nintendo Wii for commemoration of the launch for the latest edition of video game Zelda, Black Smith pizza chain and the latest, Ottogi ramen.